Which European City Should you Take your First Graduate Job in?


Whether your degree comes to an end this winter or you have one more semester to go, you’ll already be thinking about your first serious graduate job and where it might take you. But perhaps this is a topsy-turvy way to look at things.

No job or career takes up every moment of your life, and it can be healthier in the long-run to start out thinking about how you want to live, not just how you want to work. Ambition is great, but too many of our parent’s generation hit a wall when they reached retirement because they never worked out how to live.

There are many different factors to take into consideration, including the culture, arts scene, fitness opportunities, costs, and – yes – economy and job market of a town you’d like to live in. Thankfully, the people at resume.io have done your homework for you and researched the best cities in Europe to live as a graduate, depending on what you’re looking for. 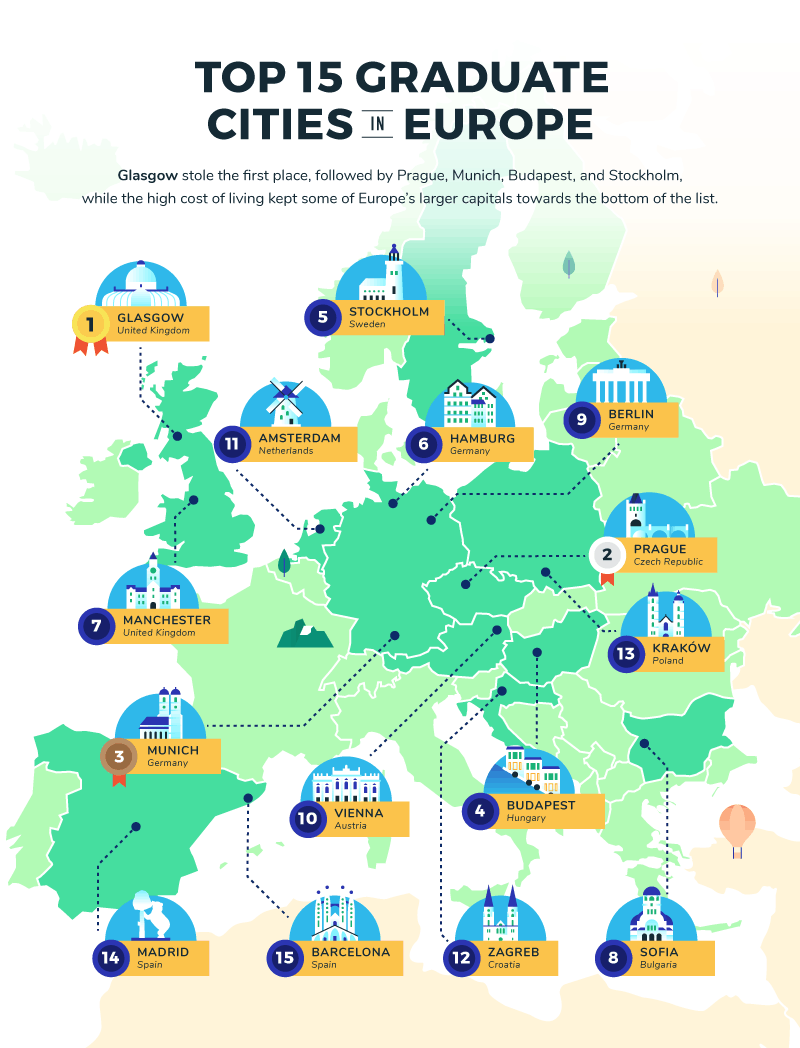 Let’s be serious and start with that all-important career consideration: where are the jobs? While different cities have opportunities for different expertise, the researchers found that the overall best city to move to for work is Munich, in Germany. Munich has a thriving economy and just 3.5% unemployment, plus average wages of €2,645.98 ($2,965.06) each month. This is the top average wage of the cities the researchers looked at.

Jobs in Munich are particularly on the rise for architects, engineers, and information/communications graduates.

Munich also has a pretty hot cultural and social life. But if these aspects are your priorities, you may be better off heading for Austria. The capital, Vienna, came out on top for arts and entertainment in the study. The researchers found that pound-for-pound, Vienna has more museums, theatres, concert venues, and libraries than other European destinations.

But just as crucial is an element that can’t be measured: the Viennese ‘culture of culture.’ While a city such as Oslo in Norway may pile hundreds of millions into new opera houses and galleries to make a name for itself as a cultural hotspot, in Vienna the locals (and international art students) simply breathe art and creativity. Just look at the tradition of concert cafes, where music flows as even more freely than the coffee.

There is another aspect that will be playing on the minds of many near-graduates thinking of a new city home: can I afford it? The cost of living and average apartment rental were also factored into resume.io’s research.

The cheapest place they looked at when taking into account variables such as public transport costs, utilities, grocery shopping, going out, and working out, was Bucharest in Romania. The ‘Paris of eastern Europe’ costs a fraction of the real Paris, with a single person able to cover the costs mentioned for around €439.13 ($492.08) a month.

As for rent, it is Sofia in Bulgaria. A one-bedroom apartment in the country’s capital and largest city costs around €364.56 ($408.52) a month – maybe one-third of what you would pay in London! Sofia also has the second-lowest cost of living of the cities the study looked at. You might not find all the amenities or attractions of some of the pricier cities on the chart, but you can afford to have a lot of fun looking!

Why not take a good luck at the study to see if there is a city that appeals to you – or if the city you’ve been dreaming of is as affordable/fun/prosperous as you’ve been told! Even if you don’t see yourself graduating to any of the cities in the chart, it is a great way to start really thinking about what you want from your graduate life.

About the author: John Cole writes on behalf of NeoMam Studios. A digital nomad specializing in leadership, digital media, and personal growth topics, his passions include world cinema and biscuits. A native Englishman, he is always on the move, but can most commonly be spotted in the UK, Norway, and the Balkans